The Center for Auto Safety (CAS) today petitioned the National Highway Traffic Safety Administration (NHTSA) to “take action to protect children riding in the rear seats of vehicles from the risk of being killed or severely injured when struck by a collapsing front seatback in a rear-end crash.” The petition asks NHTSA to warn parents as follows:

As the petition states, “The problem underlying the need for the warnings sought by petitioner is, of course, the poor performance of seatbacks in rear-end crashes, and of serious inadequacy of the federal motor vehicle standard, FMVSS 207, which specifies minimum seat and seatback crash performance levels.” Attached to the petition is a timeline, “Collapsing Seatbacks And Injury Causation: A Timeline Of Knowledge,” which summarizes “the history of manufacturer and NHTSA inaction to ensure that in rear-end crashes, front seats provide adequate protection not only for their occupants but for people in the rear seats behind them.”

For many years NHTSA has urged parents to place children in the rear seats of cars because of the risk that in the front seat, they might be injured by inflating airbags in frontal crashes. But the “unintended consequences” of this policy, the petition notes, has been to “expose them to another kind of hazard – that of being struck or crushed when the back of a front seat occupied by an adult collapses rearward… Until cars on the American highway are equipped with adequately strong front seats and seatbacks, children in rear seats behind occupied front seats will continue to be in danger of death or severe injury from front seatback failures in rear-end impacts.”

The petition reports on the results of an analysis of NHTSA data by Friedman Research Corp. Done at the Center’s request, the analysis shows that over the twenty-four year period 1990-2014, nearly 900 children seated behind a front-seat occupant or in a center rear seat died in rear impacts of 1990 and later model-year cars. 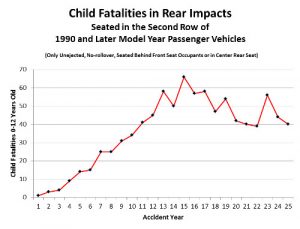 As the Timeline shows, NHTSA has frequently been alerted to the hazards of weak designs and inadequate federal performance standards for seats and seatbacks. “Papers published by the Society of Automotive Engineers as early as 1967 described the need for adequate of front-seat crashworthiness in graphic and alarming terms. A poorly designed car seat ‘becomes an injury-producing agency during collision,’ said one. Another stated, ‘…a weak seatback is not recognized as an acceptable solution for motorist protection from rear end collisions.’”

In 1974, the petition notes, NHTSA announced its intention to develop a new standard “covering the total seating system” and requiring dynamic rear-impact crash testing. But thirty years later, in 2004, it abandoned the plan, saying it needed “additional research and data analysis” and leaving in place the woefully weak requirements of FMVSS 207, a standard which has not been upgraded since its adoption in 1967.

In its conclusion, the petition states that warning parents of the hazards of front seatback collapse to children in rear seat is an essential measure “made necessary by the continued absence of a federal motor vehicle safety standard requiring that cars be equipped with adequately protective front seats.” The agency “can take most of the requested steps on its own, without time-consuming rulemaking, and should do so promptly,” the petition notes.

Collapsing Seat Backs and Injury Causation: A Timeline of Knowledge

Safest place for kids is behind an unoccupied front seat, says Center for Auto Safety – 9/13/16

Markey, Blumenthal Letters to Automakers on Seat Back Safety

Total Reported Deaths and Injuries with Seat as Contributing Component