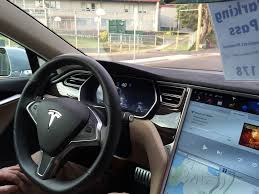 Jason K. Levine, Executive Director of the Center for Auto Safety, does not believe that trust is warranted. “Based on Tesla’s cavalier attitude up until now when it comes to quality control, the safety of their [systems], or educating consumers regarding the limitations of their technology,” he says, “There is nothing that should lead anyone to believe ‘entirely safe fully self-driving’ vehicle software is being released by Tesla anytime soon. All car manufacturers have a conflict of interest when it comes to putting safety before revenue. Most aren’t quite as publicly obvious about which one they are choosing as Tesla has been.”

During Tesla’s quarterly earnings call in October, CEO Elon Musk reiterated a striking projection: the company is on the verge of releasing its long-promised Full Self-Driving package.
“While it’s going to be tight,” Musk said, “It still does appear that we will be . . . in early access release of a feature-complete Full Self-Driving feature this year.”
Tesla has not clarified what an “early access” release would entail, and the electric carmaker is notorious for flexible timelines. But the end-of-year goal has held steady since at least February—and with the end of 2019 fast approaching, that would mean at least some Tesla owners could get Full Self-Driving within a matter of weeks.
Any release of Full Self-Driving (FSD) this year would be a massive public relations coup, giving Tesla at least some claim to be the winner of the decade-plus race to create a self-driving car. As a sizable bonus, the company says it would also allow nearly $500 million in revenue from pre-orders of the self-driving features, held off the books for years, to be recognized in quarterly earnings statements. This has the potential to transform Tesla’s near-term financial outlook.
Tesla did not respond to multiple requests to comment for this story. But it has admitted that cars will not be fully autonomous when Full Self Driving is released. “There’s the car being able to be autonomous, but requiring supervision and intervention at times. That’s feature complete,” Musk said on the October earnings call. “And it doesn’t mean like every scenario, everywhere on earth, including every corner case, it just means most of the time.”
There is ample evidence, however, that Tesla drivers routinely use existing features such as Autopilot without following the company’s guidelines for driver supervision. And the kind of scenarios Musk says FSD won’t be able to handle on release have already led to accidents of varying severity for users of other autonomous features.
Click here to read the full article from Fortune Magazine.