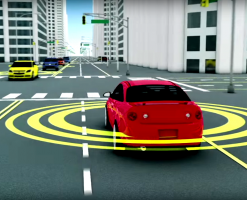 Jason Levine, executive director of the Center for Auto Safety, said in a statement that the long-term safety of the rule hasn’t yet been determined, but said that the agency has not focused on Congressional safety mandates over the last four years.

“NHTSA’s insistence of enabling the fast deployment of self-driving vehicles by amending rules written for cars with drivers, instead of recognizing the unique characteristics of autonomous technology, may be the fastest way to authorize the deployment of autonomous vehicles but it is not a consumer safety driven approach,” he said.

It marks the first major update to existing federal safety standards to accommodate innovations in driverless technology. While no fully autonomous vehicles are for sale for consumers now, industry experts expect that market share for self-driving cars and trucks will expand in the coming decade.

A self-driving Nuro vehicle in front of a CVS Pharmacy
The rule — months in the making — also allows manufacturers more leeway to design self-driving vehicles without controls meant for human drivers, such as steering wheels or pedals.

Click here to see the full story from The Detroit News

Center for Auto Safety @Ctr4AutoSafety #RecallRounup No one should be caught by surprise about an unsafe car when there's so many unknown dangers out there! Let @Ctr4AutoSafety keep you informed on #safety and maintenance issues with YOUR car. Find out more: https://t.co/gT54ozTDWi https://t.co/FHxIWzlcV3