When the United States was considering its first attempt to save oil more than three decades ago, a Ford Motor Co. official testified against the bill before Congress.

The Corporate Average Fuel Economy standards, which have come to be known as CAFE, would result, she said, “in a Ford product line consisting of either all sub-Pinto-sized vehicles or some mix of vehicles ranging from a sub-sub-compact to perhaps a Maverick."

Her warning notwithstanding, Congress put the standards into effect in 1975. One need not look beyond the nearest intersection to see how wrong she was. 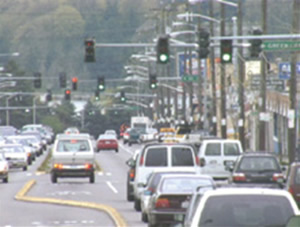 Despite an automaker’s warning that government fuel economy standards would  greatly restrict options, American drivers have had a wide range of choices when it comes to buying cars and light trucks.

Still, the auto industry has balked at voluntarily improving the fuel economy of its cars and light trucks. As a result, the United States continues to lag behind other nations in taking the single biggest step to curb global warming while reducing the consumption of oil and saving money at the gas pump.

So, government policies are necessary to require the industry to make continuous improvements in fuel economy.

Two laws are the primary drivers in the effort to bring higher fuel economy to the nation’s roads and highways, and to produce lower greenhouse gas emissions from tailpipes. These are the Corporate Average Fuel Economy law and California’s Clean Car standards.

Automakers must meet Corporate Average Fuel Economy (CAFE) standards that set average mileage requirements each year for new cars and light trucks. Congress passed these standards in 1975 in response to the OPEC oil embargo. CAFE succeeded in doubling fleetwide fuel economy from 13.8 miles per gallon to 27.5 miles per gallon for passenger vehicles in just over ten years, helping protect American consumers from high gasoline prices and oil shortages. The increased mileage requirement is producing dramatic fuel savings. According to the National Academy of Sciences, instead of using 12 million barrels of oil a day, the United States has trimmed its consumption by three million barrels, to nine million barrels a day. In short, CAFE is the United States’ most successful oil-saving program.

However, for nearly 20 years, opposition from the auto industry blocked efforts in Congress to increase the mileage standard. After hitting its peak in 1989, the average fuel economy of new vehicles actually declined for the next 18 years, despite the wide availability of cost-effective, fuel-saving technology. In particular, the light-truck loophole damaged overall fuel economy. When Congress enacted CAFE standards, it set separate standards for passenger vehicles and light trucks. At the time, the category of light truck—pickups, SUVs and vans—constituted work trucks and commercial vehicles and represented a very small percentage of the new vehicles sold each year. However, automakers began to exploit this loophole by selling more vehicles as light trucks to qualify for weaker standards. In recent years, more than half the new vehicles sold have been classified as light trucks. As a result, since 1989 U.S. oil dependence continued to increase and global warming emissions from passenger vehicles grew at a steady rate, due to stagnation of the mileage standard.

After nearly 20 years of delay, Congress passed higher fuel economy standards as part of the comprehensive Energy Independence and Security Act of 2007. The legislation raises standards to at least 35 miles per gallon fleetwide by 2020 and allows the Department of Transportation to set stronger standards based on cost-effectiveness and technological availability.  According to analysis by the Union of Concerned Scientists, this will save at least 1.1 million barrels of oil per day in 2020 – an amount equal to nearly half of what we import from the

New fuel economy standards passed after 20 years of delay raise average fleetwide mileage requirments to 35 mpg by 2020. This could save as much as 1.1 million barrels of oil a day, the Union of Concerned Scientists estimates.

Persian gulf. At the same time, consumers will save more than $22 billion in 2020, even after paying the additional costs of fuel-saving technology. Finally, these new standards will prevent the release of more than 190 million metric tons of heat-trapping global warming pollution. That is the equivalent of removing 28 million cars and trucks from the road.

While the new fuel economy standards establish a strong floor for the Obama administration to build on, there is sufficient cost-effective technology to push fleetwide fuel economy standards well beyond 35 miles per gallon. Multiple studies have shown that by utilizing conventional technology, cars and trucks could reach an average of more than 42.5 mpg fleetwide by 2020–and do so cost effectively. By 2025, the fleet could average well more than 50 mpg by introducing more hybrid-electric vehicles and making sensible changes to the weight and acceleration speeds of vehicles.

pollution standards for any pollutant that endangers public health or welfare. For years, the agency has used the Clean Air Act to reduce smog and soot coming from cars and trucks. When the EPA failed to act on global warming and the Department of Transportation failed to set tough new CAFE standards, California stepped into the void.

Under the Clean Air Act, the State of California is empowered to set its own tailpipe pollution standards. It gained this permission, alone among the states, in recognition of its long-standing struggle with poor air quality. In response to the federal government’s refusal to act, the California legislature passed a law in 2002 establishing greenhouse gas standards for new vehicles sold in the state. These standards are often called the “Pavley” standards after Assemblywoman Fran Pavley, who sponsored the legislation.

Three years later, the California Air Resources Board, known as CARB, unveiled greenhouse gas standards that require a 30 percent reduction in greenhouse gas emissions fleetwide by 2016. These standards achieve greater emissions reductions than any federal standard, while still saving consumers money at the gas pump over the lifetime of their vehicle.

Any state can follow the California standards instead of the federal standards; fourteen are doing so. When implemented, these more-stringent state standards will cover nearly half of the new vehicles sold in the United States. They will become a de facto national regulation, because automakers are likely to decide in the end to comply with the tougher standard for sales across the country, rather than building two different versions of the same car model to meet one set of rules in 15 states and another set elsewhere.

The Clean Air Act provision allows California to set its own standards. However, it requires the U.S. Environmental Protection Agency to grant it a waiver before the state can implement the tougher rules. Although EPA had never denied California’s waiver requests throughout the program, the Bush administration rejected it. Arguing that the Clean Air Act did not recognize carbon dioxide and other greenhouse gases as pollutants, the administration blocked California’s ability to set the standards. California and other states that had adopted its law contested this view in court, culminating in the landmark Supreme Court decision, Massachusetts v. EPA. This decision held that greenhouse gases threaten public health and welfare and should therefore be covered under the Clean Air Act. It also directed the EPA to adequately address this issue and set new regulations if necessary.

The auto industry has also filed multiple lawsuits challenging the clean car standards that California and other states have sought to implement. The industry has argued that these rules set fuel economy standards and are therefore preempted by federal law. All three courts that have considered the challenges have rejected the auto industry’s arguments.

Less than a week after he took office, President Obama directed the EPA to reconsider issuing the waiver—sending a clear signal that the new administration would grant it and allow California and the other states to proceed.

The Road Ahead for Greenhouse Gas Tailpipe Standards

Regardless of the federal government’s course, the states are continuing to move forward. As part of California’s state climate change law, AB 32, the California Air Resources Board (CARB) is preparing the second phase of the state greenhouse gas tailpipe standards. This will most likely cover model years 2016-2020. This year, California will release a draft of implementation plans specifying proposed vehicle standards that will help achieve the statewide goal of reducing global warming emissions to 1990 levels by 2020—a cut of 30 percent.

In order to reach these important targets and continue bringing the best clean car technology to the market, CARB, the state board, must set aggressive new provisions for the second phase of the greenhouse gas tailpipe standards. While the California standards are the strongest in the United States, they fall far short of the greenhouse gas rules enforced in Europe and Japan. Early analysis by the state air resources board demonstrates that available technology can be used to achieve more significant reductions during 2016-2020. It is critical that the ultimate standards set an aggressive pace for the nation.

Much as it fought the federal fuel economy law in the mid-1970s, the auto industry will continue pressuring CARB, looking for weaker rules and a way to prevent additional states from opting for the California Clean Car Standards.

But years of delay by the federal government have given the states the opportunity and responsibility to lead by expanding clean car standards around the country.

As it focuses in 2009 on more stringent standards, California, the Golden State, has a golden opportunity to forge ahead with requirements that will produce meaningful reductions of greenhouse gas emissions.

To read about the responsibilities of the automobile industry, click here.