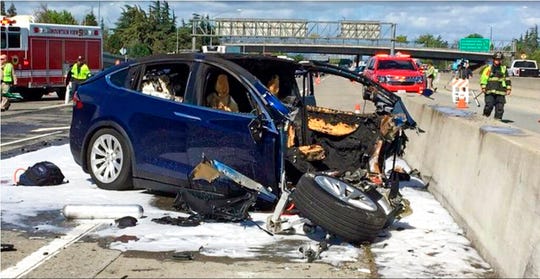 “For several years now, the Center for Auto Safety has been calling for federal action to address the obvious risks of using misleading terms like ‘AutoPilot’ and ‘Full Self Driving’ for what has now repeatedly been shown to be a lethal driver assist system — not a replacement for drivers,” Jason Levine, executive director of the Washington-based Center for Auto Safety, said in a statement released as the NTSB hearing was taking place.

“Today’s headlines are going to be about Tesla and NTSB,” Levine said. “But the real villain in this story is the leadership at the National Highway Traffic Safety Administration who, by failing to recall or regulate, are demonstrating either willing ignorance or extraordinary incompetence.”

Washington — The driver of a Tesla Model X SUV involved in a fatal 2018 crash that occurred while the car was being operated in the automaker’s Autopilot mode was playing a video game behind the wheel, the chairman of the National Transportation Safety Board Chairman said Tuesday.

The agency placed blame for the March 2018 crash on the distracted driver, Tesla Inc. and Trump administration officials for not doing enough to prevent crashes involving cars that have semi-autonomous features that drivers easily mistake for being capable of full self-driving.

“If you own a car with partial automation, you do not own a self-driving car. Don’t pretend that you do,” NTSB Chairman Robert Sumwalt said at a hearing in Washington about the Tesla crash.

“This means that when driving in the supposed ‘self-driving’ mode: you can’t sleep; you can’t read a book; you can’t watch a movie or TV show; you can’t text; and, you can’t play video games,” he continued. “And, that is precisely what we found in this crash — the driver was playing a video game on his smartphone when his car veered into the median barrier.”

Sumwalt slammed Tesla and the Trump administration officials for failing to do more to prevent crashes involving circumstances like the Tesla accident, which took place in Mountain View, Calif., in March 2018.

“It is foreseeable that some drivers will attempt to inappropriately use driving automation systems,” Sumwalt said. “To counter this possibility, in 2017 we issued 2 recommendations to 6 automobile manufacturers. Five manufacturers responded favorably that they were working to implement these recommendations.
Read the whole article from The Detroit News.