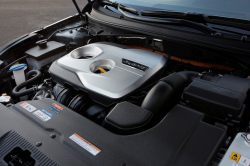 The Hyundai engine recall is the result of a June 2018 petition to the National Highway Traffic Safety Administration (NHTSA) submitted by the Center for Auto Safety. The Center said NHTSA should investigate non-crash fires in 2011-2014 Kia Optima and Sorento, and 2011-2014 Hyundai Sonata and Santa Fe vehicles.

A Hyundai engine recall follows at least 45 fires and affects more than 130,000 model year 2017 Tucson and Sonata Hybrid vehicles which may be at risk of engine stall, damaged engines or fires.

According to Hyundai, the connecting rod bearings inside the engine may wear prematurely which results in abnormal knocking noise from the Nu engine and illumination of the oil pressure warning light. Continuing to drive the vehicle could damage the engine and cause it to stall.

Click here to view the full story from Carcomplaints.com.