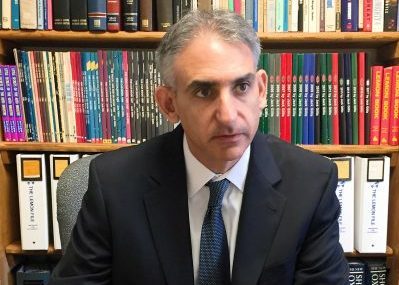 Ralph Nader, who founded the Center for Auto Safety with Consumers Union in 1970, said: “Following the tragic loss of the Center’s Executive Director, Clarence Ditlow, for decades America’s guardian angel for motorists’ safety, fuel efficiency and cleaner air, the appointment of Jason Levine, an accomplished former public servant for several federal agencies, should assure a productive continuity for the Center’s critical missions. The Trump administration’s announced fervor to abandon law and order for corporate misbehavior intensifies the challenges for the Center and the American people. As an attorney, with government experience in dealing successfully with pressured situations, Jason Levine’s known passion for consumer health and safety will serve the public interest well.”

Mr. Levine stated: “Despite rising auto fatalities, and new recalls coming almost daily, the current administration has shown no interest in meeting its statutory duty and moral responsibility to enforce safety laws on behalf of drivers, passengers, and pedestrians. American consumers expect their government to prevent the false advertising of used cars and protect the environment from auto pollution. Yet, the only momentum we see in Washington is a regulatory rollback that too many in the auto industry are aiding and abetting. The Center’s role as the eyes, ears, and voice of the consumer is more important than ever.”

Mr. Levine, a consumer protection attorney, has held leadership positions in three federal agencies, including Chief of Staff at the U.S. Consumer Product Safety Commission (CPSC) and Director of the Office of Congressional, Legislative, and Intergovernmental Affairs at the U.S. Office of Personnel Management (OPM).

Joan Claybrook, former Administrator of the National Highway Traffic Safety Administration (NHTSA), President Emeritus of Public Citizen, and a member of the Center’s board, said: “Since the beginning, the Center’s leadership has focused on following the data wherever it may lead and taking on the auto industry and government agencies on behalf of consumers regardless of the difficulty of the fight. By speaking truth to power, the Center’s efforts have led to millions of recalls of cars, tires, child seats and most recently tens of millions of Takata airbag inflators, actions which when combined have likely saved tens of thousands of lives. A consumer’s ability to seek legal recourse in all 50 states for a defective car and receive recall repairs free of charge is directly attributable to the work of the Center. Jason will continue in that tradition.”

Over the last 47 years the Center has successfully led the fight for lemon laws in every state, airbags in every vehicle, and recall repairs being made at no cost to the consumer. Under Mr. Levine’s leadership the Center will continue to advocate for consumers in all aspects of auto safety, including the cars on the road today and the vehicles of tomorrow.

“In the weeks and months to come the Center will continue to focus public attention on the nation’s more-than 35,000 annual auto deaths, the second leading cause of accidental death in the United States. The rise in auto deaths only makes more urgent the need for a consumer safety-focused NHTSA.” Mr. Levine added: “We will be making the case for a regulatory framework that ensures that manufacturers of autonomous vehicles are not using consumers as guinea pigs; a Federal Trade Commission that enforces truth-in-advertising laws, particularly when it comes to used cars; and an Environmental Protection Agency that protects the environment by maintaining strong emissions standards.”

Mr. Levine spent almost six years at the CPSC during the Obama administration, including four as Chief Counsel to Commissioner Robert Adler. He previously served in the same position at the Federal Election Commission for Commissioner Ellen Weintraub, and later served in an advisory capacity to the Assistant Secretary for Aging, Kathy Greenlee, at the U.S. Department of Health and Human Services. He joined OPM in August 2015 to lead the agency’s response to Congress in the midst of the highly publicized cyber incidents involving federal employee data. He is a graduate of the University of Connecticut School of Law, with honors, and received a Bachelor of Science degree from Northwestern University.

The Center for Auto Safety is a membership-driven organization headquartered in Washington, DC.  The Center is home to the Safe Climate Campaign, which fights global warming by working for big, specific measures to reduce greenhouse gas emissions, including slashing auto emissions and cutting the nation’s oil use in half. The Center is also the publisher of The Car Book, which has for the last 37 years been America’s most comprehensive car buying guide.