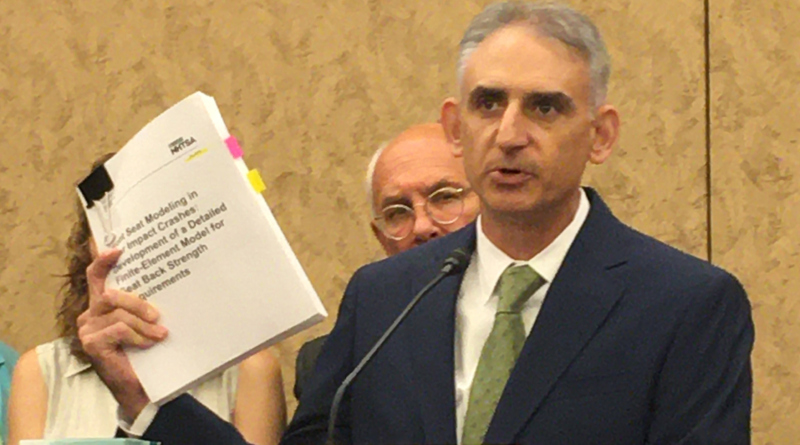 Jason Levine, Executive Director, the Center for Auto Safety: “Far too often vehicle safety takes a back seat in conversations regarding infrastructure or innovation.  That is not the case when it comes to the INVEST in America Act which recognizes the potential advanced vehicle technology, combined with new standards, can play in consumer safety.  By requiring rules that use existing technologies to combat impaired driving, mandating the deployment of crash avoidance technology, and including an update to the completely out of date 5-star crash rating system the INVEST in America Act, if enacted, will help to prevent tens of thousands of deaths annually in the very near future.  Further, by requiring the inadequate seatback standard be rewritten it takes a giant leap towards ending the nightmare of catastrophic injuries and deaths suffered unnecessarily by so many victims for the last fifty-four years.  We are grateful on behalf of all drivers, passengers, and pedestrians for the many auto safety advances included in the INVEST in America Act and we look forward to these provisions being quickly adopted by the Senate.”

Center for Auto Safety @Ctr4AutoSafety We say: “Vehicle mfrs (e.g. @Tesla) who choose to beta-test their unproven technology on both the owners of their vehicles & the general public w/o consent at best set back the cause of safety & at worst result in preventable crashes and deaths.” cc: @NHTSAgov @ConsumerReports https://t.co/5if2RvWqLl

h J R
Center for Auto Safety @Ctr4AutoSafety Michelle and Jason Fraser talk about why the #ModernizeSeatBackSafety Act is so important to them, their daughter Jay Fay who was permanently injured, and how it will protect families like theirs if enacted. https://t.co/bDTAXxpBN6 @ScrippsNational

h J R
Center for Auto Safety @Ctr4AutoSafety 7:45pm. Standing on the sidewalk. Impaired driving is an epidemic....but there's technology available and under consideration in Congress to combat drunk, drugged, distracted, and drowsy driving. The time to act is NOW. https://t.co/YpvojmOP5e cc: @MADDOnline

h J R
Center for Auto Safety @Ctr4AutoSafety Details remain unknown about the #hitandrun that killed @matchu_chutrain - but yet another pedestrian death where advanced vehicle safety technology might have reduced the chances of a tragedy. Our deepest condolences to his family. https://t.co/q40LuktG3V