GOING FARTHER ON A GALLON OF GASOLINE

Making our cars and trucks go farther on a gallon of gas is the biggest single step we can take to curb global warming, cut America’s oil addiction and save money at the gas pump.

By using existing technology, automakers can build all their vehicles—from sedans to pickups to SUVs—to get better fuel economy. We can drive a new fleet of fuel-efficient vehicles that are more advanced and safer.

With existing technology, cars can be designed so we can stop pouring dollars into the tank.

Automakers boast that they have improved their energy efficiency.  But most of these gains have gone to making cars bigger and faster.  If all the efficiency improvements since 1988 had instead been directed at getting more miles per gallon, cars would have averaged 45mpg instead of 30.3 in 2008, Feng An and John DeCicco found in a study published by the Society of Automotive Engineers. Light trucks would have achieved an average of 31.0 rather than 22.5, they determined. Increasing fuel economy reduces global warming emissions from cars and trucks. Each gallon of gasoline burned creates 28 pounds of carbon dioxide, the main global warming pollutant. Nearly 20 pounds come directly from the tailpipe and eight additional pounds are emitted from extracting, transporting and refining oil. So, driving cars and light trucks that use less gasoline reduces the heat-trapping emissions. Using existing technology, we can reduce global warming emissions from American vehicles by more than thirty percent within the next ten years—and do so in a cost-effective way.

Improved fuel economy delivers real savings at the gas pump. Unfortunately, there are very few cures for rising gasoline prices – except to consume less gas. Better fuel economy means that you have to fill up less often. Using existing technology, the average consumers could save more than $3,000 at the gas pump over the life of their vehicles, even after paying for the fuel-saving technology.

One key benefit: Cutting gasoline consumption reduces our nation’s dependence on oil. The United States consumes more than 20 million barrels of oil each day. As a result, we send hundreds of billions of dollars to oil-producing countries each year to sustain our dangerous dependence on their oil. Because most of this oil goes to fueling our cars and trucks, we can help break this dependence by boosting fuel economy. If we require all new vehicles to use the best existing technology, by 2020 we could save more oil than we currently import from the entire Persian Gulf.

FUEL-SAVING TECHNOLOGY IS READY FOR USE TODAY

Automakers have a wide range of existing technology that can improve the fuel economy of a conventional car or light truck. These include more-efficient engines, better aerodynamics and smarter transmissions, the mechanism that shifts gears in cars and trucks.

Increasing the efficiency of a vehicle’s engine is one of the most effective methods to boosting fuel economy. Such technologies as variable valve control allow an engine to adjust the intake of oxygen into the cylinders to improve the efficiency of the engine at all speeds. Lean-burn technology, which introduces a higher ratio of air to fuel into the combustion chambers, also improves engine efficiency. Cylinder deactivation saves gas by shutting down unnecessary cylinders during the drive cycle when additional horsepower is not needed. This technology is particularly applicable in larger engines.

Advanced Ignitions: In city driving, vehicles can burn as much as 15 percent of their gasoline sitting in traffic. Replacing conventional starter and alternator 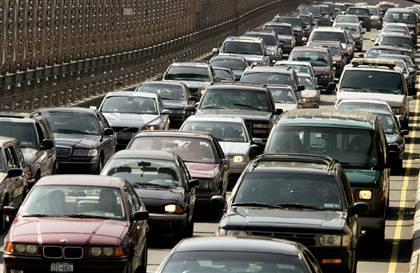 Traffic jams can cost us up to 15% of our fuel, and there’s often not much we can do about the jam. But automotive engineers can replace conventional components to reduce the waste–and the polllution.

components with an Integrated Starter Generator (ISG) allows a gasoline engine to momentarily shut off when a vehicle is idling. The ISG restarts the motor instantaneously as the driver presses the accelerator. This is similar to moving a computer mouse to awaken a sleeping computer.

High-strength, Light-weight Materials: Substituting new high-strength, light-weight steel, aluminum and plastic compounds can help reduce weight while enhancing safety. These strong and light-weight materials save gas by reducing the amount of work the engine does to move the car or truck.

HYBRIDS: WAVE OF THE PRESENT

While we can make substantial gains using conventional technology, there are new choices on the road that demonstrate the next stage of automotive technology. The most exciting of these are hybrid-electric vehicles. Hybrids combine the range and convenience of gasoline power with the low emissions and efficiency of an electric motor.

Hybrids running on gasoline and electricity are here, on the road and reducing demand for fossil fuel.

While there are different hybrid designs, all hybrid vehicles draw power from both sources—electricity and gas–to maximize fuel economy in different driving situations. When necessary, the gasoline engine is used to recharge the electric battery. At the same time, by using regenerative braking, hybrids capture energy normally lost during braking. That energy is usually wasted.

A hybrid-electric Toyota Prius releases less than half the global warming pollution of a conventional sedan, due to its impressive fuel economy. Even though hybrids cost more up front, their drivers save money by buying less gas.

NEW TECHNOLOGY ON THE HORIZON

Automotive engineers are continuing to develop additional fuel-saving technology. While these technologies are not ready for widespread sale, they are coming closer to reality and may help achieve greater emissions reductions in the future.

Due to its design, a diesel engine is more fuel-efficient than conventional gasoline-powered engines. In some cases, diesel engines can achieve a 30-40% improvement in fuel economy. Unfortunately, diesel engines tend to release dramatically higher smog and cancer-causing particulate pollution. In an effort to protect public health, environmentalists and health advocates have opposed using diesel engines in a large part of the passenger vehicle fleet.

However, new diesel engine designs, combined with better tailpipe pollution controls and cleaner low-sulfur diesel fuels, are beginning to put diesel vehicles on the path to meeting stricter air quality standards. If engineers can succeed in reducing diesel tailpipe emissions to meet air pollution standards, there may be a role for diesel engines to help boost fuel economy in certain vehicles. Nevertheless, advanced diesel vehicles are still expensive to produce and are not yet cost-effective compared to hybrid-electric vehicles.

These vehicles utilize larger electric battery packs to expand the all-electric range of a hybrid vehicle. They can be plugged into electric outlets to recharge. Unlike conventional hybrids, plug-in hybrids can run long distances at moderate speeds on

just the electric motor. While this can dramatically boost the fuel economy of the vehicle, it requires the vehicle to be charged. By contrast, conventional hybrids never need to be plugged in.

Plug-in vehicles have tremendous potential, but currently their batteries are expensive and heavy. In addition, because plug-in hybrids draw electricity from the electric grid, it is important to consider the global warming emissions created by power plants when assessing the full environmental impact of these vehicles. As a result, it is critical that we create a clean electricity grid with low greenhouse gas emissions before moving to substantial deployment of plug-in hybrids.

Fuel cells are chemical batteries that produce electricity using hydrogen as the fuel. In fuel-cell vehicles, this electricity powers the vehicle, replacing the need for a gasoline engine. Because a fuel cell’s only byproduct is water, these vehicles are truly zero-emissions in that they do not release carbon dioxide. While fuel-cell vehicles are similar to electric vehicles in that they operate using an electric motor, unlike either the all-electric or plug-in hybrid vehicles, they do not have to be recharged. Instead, fuel-cell vehicles have storage tanks that can be filled with hydrogen.

While fuel-cell vehicles show tremendous promise, technological and economic problems must be solved before they can enter widespread use. Electricity is required to produce hydrogen fuel. So, for these vehicles to be placed in a true zero-emissions category, the hydrogen must be created using renewable energy sources that themselves do not release heat-trapping global warming emissions. At the same time, we need to develop systems to efficiently and safely distribute hydrogen fuel for these vehicles. Finally, fuel cells are currently expensive to produce; their price must come down dramatically before they are affordable for average consumers.

A battery electric vehicle (EV) runs exclusively on electricity. EVs have battery packs that store electricity. The electricity is used to power motors that turn the wheels. Instead of filling up with liquid fuel, EVs recharge using electricity from the grid or such stand-alone electricity sources as solar panels. Because these vehicles operate solely on electricity, they achieve the ultimate goal: They produce no tailpipe emissions.

All this can be done in cars and SUVs similar to those we are accustomed to driving. If we are willing to take another second or two to hit 60 miles per hour and shave some of the bulk from our vehicles, we can slash our oil addiction, global warming emissions and gas costs even more. Think of what we can save: Oil, money, and our planet.