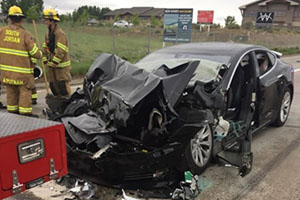 “At some point, the question becomes: How much evidence is needed to determine that the way this technology is being used is unsafe?” said Jason Levine, executive director of the nonprofit Center for Auto Safety in Washington. “In this instance, hopefully these tragedies will not be in vain and will lead to something more than an investigation by NHTSA.”

DETROIT — Three crashes involving Teslas that killed three people have increased scrutiny of the company’s Autopilot driving system just months before CEO Elon Musk has planned to put fully self-driving cars on the streets.
On Sunday, a Tesla Model S sedan left a freeway in Gardena, California, at a high speed, ran a red light and struck a Honda Civic, killing two people inside, police said.
On the same day, a Tesla Model 3 hit a parked firetruck on an Indiana freeway, killing a passenger in the Tesla.
And on Dec. 7, yet another Model 3 struck a police cruiser on a Connecticut highway, though no one was hurt.
The special crash investigation unit of the National Highway Traffic Safety Administration is looking into the California crash. The agency hasn’t decided whether its special-crash unit will review the crash that occurred Sunday near Terre Haute, Indiana. In both cases, authorities have yet to determine whether Tesla’s Autopilot system was being used.
NHTSA also is investigating the Connecticut crash, in which the driver told police that the car was operating on Autopilot, a Tesla system designed to keep a car in its lane and a safe distance from other vehicles. Autopilot also can change lanes on its own.
Click here to view the full story from the New York Times